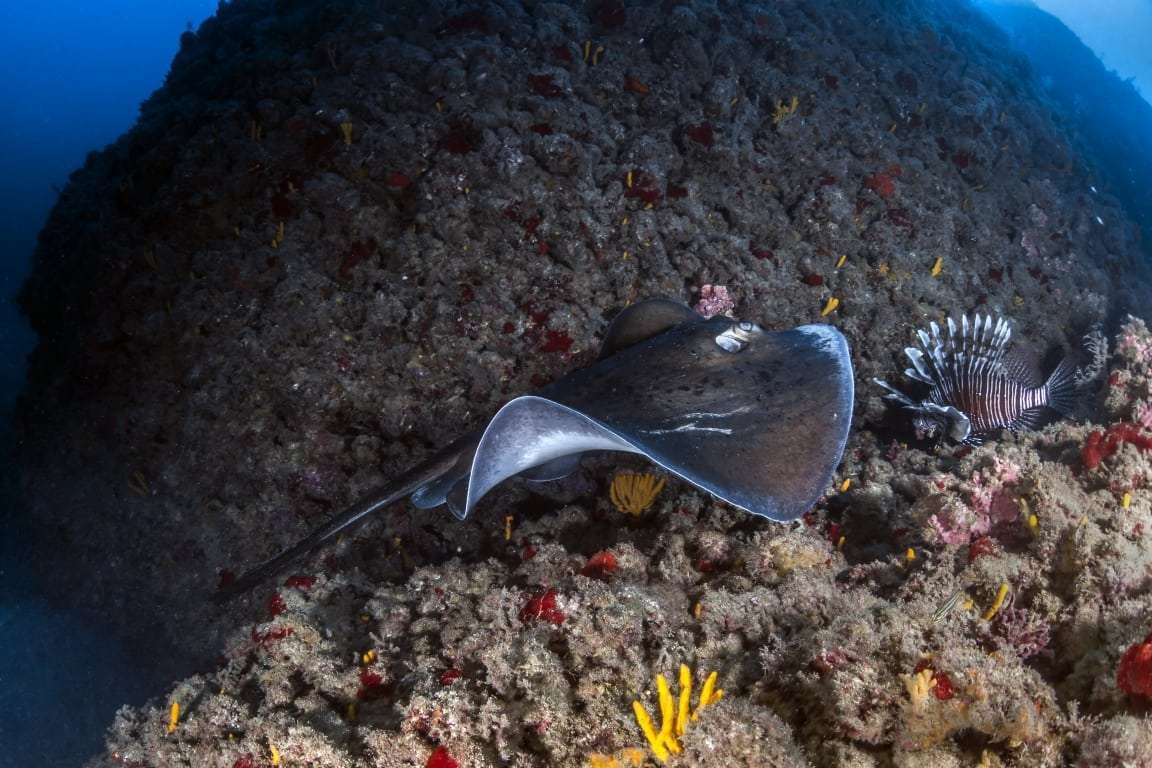 From the mid-1960s to the early 2000s, seven small marine nature reserves were officially declared along Israel’s Mediterranean coast. Since then, two more “Mediterranean marine reserves” have been added – protected marine areas at Rosh Hanikra-Akhziv and on the Carmel coast, where all the natural assets are protected in keeping with the Proclamation of National Parks, Nature Reserves, National Sites and Commemoration Sites (Protected Natural Assets) of 2005. In February 2017, a plan was approved to expand the Rosh Hanikra-Akhziv Marine Reserve, extending 15 kilometers west of the shoreline and including Akhziv Canyon, which is as much as 850 meters deep. The State of Israel is a signatory to international conventions in which it is committed to preserve 10% of its marine areas by 2020. To meet this obligation, the Israel Nature and Parks Authority is working on the official declaration of marine nature reserves in various areas, after collecting and analyzing information and preparing a masterplan.

At present, less than 0.25% of Israel’s marine areas in the Mediterranean Sea are protected as officially declared nature reserves. Like land, the sea also needs protection for its diverse habitats, animals and plants. Most of the officially declared marine reserves now extend a few hundred meters west of the shoreline, and do not protect areas representative of all the marine habitats nor do they protect areas that are unique.

It is proposed that Israel officially declare and operate marine nature reserves in a total of 20% of its territorial waters in the Mediterranean Sea. In keeping with data collected, marine nature reserves are planned that will preserve representative areas of the marine habitats typical of Israel – areas with soft foundations of migrating sand, as well as clayey foundations and extensive portions of unique habitats such as underwater kurkar ridges, areas of hard, stable rock and abrasion platforms in high- and low-tide zones. Rare habitats, such as underwater canyons and mountain ridges that descend to the sea and continue underwater, will all be included in these reserves.

Underwater reserves (both proposed and officially declared) are divided into a number of types:

In addition to marine nature reserves, marine national parks will also be established to protect ancient coastal cities with their ports and various heritage sites near the beach or at sea.

In 2015, the Israel Nature and Parks Authority, in cooperation with academic bodies and research institutions, conducted a biological survey in four of the seven small officially declared marine nature reserves along Israel’s Mediterranean coast. Preliminary findings reveal that a greater biomass of fish was observed in regularly monitored marine nature reserves. Moreover, larger fish were seen in such reserves; these fish reached breeding size, and their offspring have gone beyond the boundaries of the reserves to enrich the sea. Larger predators were also found, as well as rare species, fish with major commercial potential and endangered species like the Epinephelus.

Damage to flora, fauna and inanimate objects is prohibited in nature reserves. Fishing in marine reserves is prohibited, except for line fishing from the beach, which is allowed in some reserves in designated areas and under certain conditions. Relevant signs have been installed in reserves where fishing is permitted under those conditions.

Help us protect the sea and the marine nature reserves. In case of damage to the reserve or protected assets, please call the Israel Nature and Parks Authority information line: *3639. Reports may be sent by email to: MARINE@NPA.ORG.IL

This page is not a legal document and/or the information detailed on this page is not legally binding except for documents appended to it that have been legally approved and signed.