The large royal winery now being unearthed at Herodium sheds light, among other things, on the reasons for the flourishing of vineyards and numerous winepresses in Judea at the end of the Second Temple period. 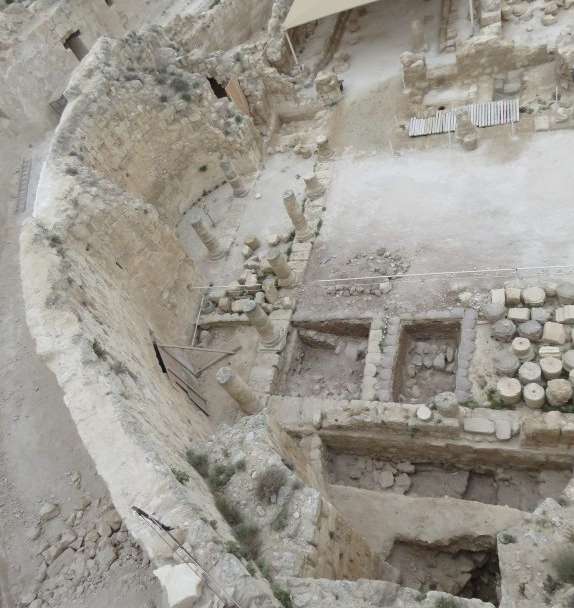 During archaeological excavations at Herodium Park (national park), which is under the management of the Israel Nature and Parks Authority and the Antiquities Department of the Civil Administration, the remains of a large royal winery were discovered for the first time in Herod’s palaces. These remains went on  public display for the first time in 2017 as part of Heritage Week in Israel, held annually during Hanukkah by the Ministry of Jerusalem and Heritage, the Israel Nature and Parks Authority, the Israel Antiquities Authority and the Council for the Conservation of Heritage Sites in Israel, with the goal of raising awareness of the importance of conserving heritage.

Minster of Jerusalem and Heritage, Ze’ev Elkin: “When I stand here today in Herodium, a five-minute drive from my home in the village of Kfar Eldad, imagine all the important events in the history of our people that took place on this mountain or at its foot, I do not need to explain why it is easy to mark Heritage Week in the State of Israel. In every corner of our country, no matter where you live, you will know how to discover a heritage site near the home of each and every one of you. Thousands of years of our history are folded into every square kilometer in the Land of Israel and there is nothing like Hanukkah to feel and demonstrate to our children the spirit of the saying ‘in those days in this season.’”

Shaul Goldstein, director of the Israel Nature and Parks Authority: “King Herod’s palace at Herodium is a site that is changing all the time, its ancient and fascinating history revealed every day. There is nothing like Herodium to launch Heritage Week in our country. In the coming year we at the Israel Nature and Parks Authority, together with our natural partners, we will continue to invest a great deal or resources in heritage sites and to reveal the findings to the general public while enhancing the experience of visiting the sites.”

The winery was discovered in 2017 during excavations of the impressive storerooms and cellars of the fortified palace that Herod built at the top of Mount Herodium. The remains include dozens of huge jars (pithoi) closely packed in a storeroom situated within the walls surrounding the round palace. The wine was apparently fermented in these huge vessels and from them it was poured into jars and amphoras that may have been stored in vaulted cellars built at that time and also uncovered in the recent excavations.

The excavations at Herodium are under the auspices of the Ehud Netzer Expedition of the Archeological Institute of the Hebrew University of Jerusalem. They are directed by archaeologists Roi Porat, Yakov Kalman and Rachel Chachy. Their implementation is part of the development of Herodium, led by the Ministry of Jerusalem and Heritage, the Israel Nature and Parks Authority, the Civil Administration, the Israel Antiquities Authority and the Israeli Institute of Archaeology. 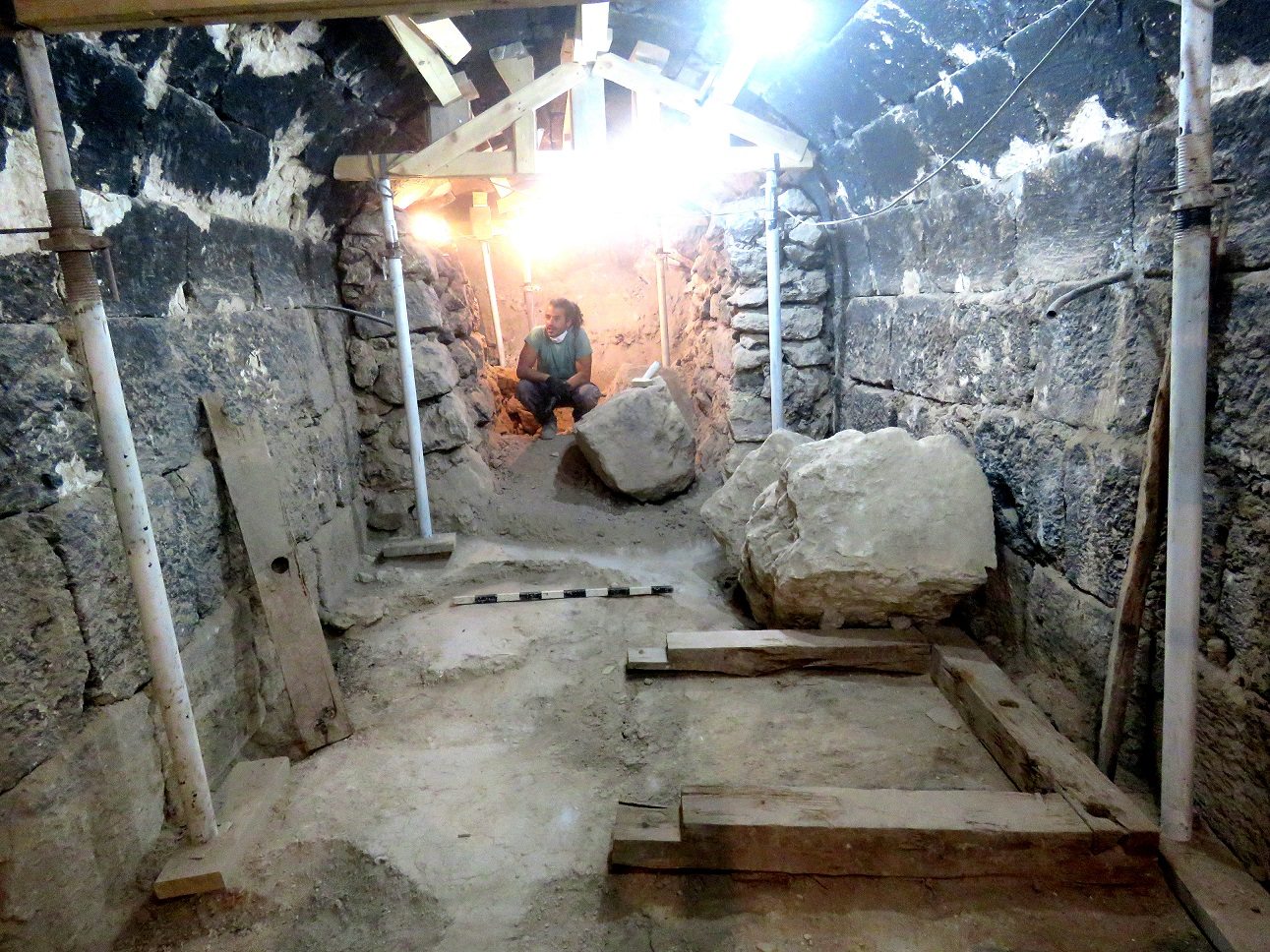 The vaulted cellar was discovered in the corridor within the structure surrounding the fortress. Wooden beams survived within it that had been installed by the Bar Kokhba rebels as part of their gallery tunnel system in the belly of the mountain. Photo: Roi Porat.

Wineries of this type from the Roman period are known in the archaeological record in Italy and throughout the empire. The use of pottery fermentation vessels was common in many periods and can be found to this day (for example, in Georgia). The wine industry was very important during the Roman period and the production, import and serving of fine wines by Herod was, of course, a manifestation of wealth and culture. It should be noted that during the excavations at Herodium as well as at Masada, dozens of amphoras were found bearing inscriptions and stamps, showing that large shipments of high-quality Italian wine were sent to King Herod. The large royal winery now being unearthed at Herodium sheds light, among other things, on the reasons for the flourishing of vineyards and the numerous winepresses in Judea at the end of the Second Temple period.

The winery, like the entire mountain palace-fortress, went out of use just before Herod died, when Mount Herodium was entirely converted into a monumental tomb for the king. In the Great Revolt, about 70 years later, when Herodium served as a rebel fortress, the storerooms in which the winery was found were turned into living quarters and even a goat pen. The rich findings from this period include many coins from the rebellion, pottery and glass vessels and remains of food. During the Bar Kokhba Revolt (132–136 CE) the palace substructure served as passageways to the system of gallery tunnels dug through the belly of the mountain. To support the tunnels, the rebels used many wooden beams that had been dismantled from Herod’s palace. Such beams survived in the recently discovered substructures.

The excavations revealed another surprising discovery under the levels of King Herod’s palace courtyard: remains of structures and a water cistern dated to the Hellenistic period – the mid-second century BCE. The remains were found buried and sealed under the palace walls and under a layer of garden soil that was placed in the courtyard when it was built. Significantly, these structures are the first evidence of activity at the site before Herod’s time.

The remains reveal organized construction at the top of the mountain, including straight, broad walls of large square rooms. Near these buildings a large, rock-hewn cistern was found, also dated to this period. This construction at the summit of Mount Herodium, with its strategic characteristics and the fact of its distance from cultivated areas in the valleys at the foot of the mountain, show that these are remains of fortifications and not an agricultural settlement.

It is possible that the site was taken over in connection with events in the area during the outbreak of the Hasmonean rebellion. Of particular note is the battle in 156 BCE between the Seleucid general Bachides against the Hasmoneans Jonathan and Simon at the village of Beth-basi, northwest of Herodium. Bachides had built fortifications in this part of Judea a few years beforehand. Thus the fortification at the top of Mount Herodium might have been part of these systems, built either by the Greeks or the Hasmoneans. Still, it should be noted that no pottery assemblages typical of the Hasmonean period itself have been found at the site, and it is possible that from that period until the time of Herod the site uninhabited.​

Last week, kids from the United States who came to Israel to tour their heritage were amazed at what...
Read more
6.3.2017

Has the ancient gate of the town of Bet She‘arim been found?

“As far as we know, a settlement like this should not have been surrounded by a wall and therefore...
Read more

The name of the Roman Emperor Maximinus Thrax, who ruled between 235 and 238 CE, has been identified...
Read more

A winepress from the Byzantine period was found in a Roman-era roofed reservoir in Tzipori (Sepphori...
Read more